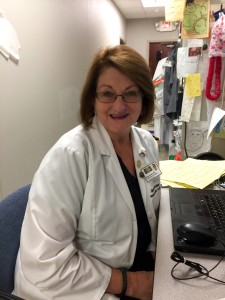 Ms. Gloria J. Jordan is a Certified Physician Assistant who was born in Roseboro, North Carolina and grew up in rural Sampson County. She completed her undergraduate work at the University of North Carolina in Greensboro where she received her Bacheolor of Arts in Biology in 1970. She also received her certification as a Medical Technologist through ASCP in 1971. Mrs. Jordan served as a Peace Corps Volunteer in Brazil, South America for three years where she taught laboratory medicine and set up clinical labs. She lived and worked in Brazil for nine years. When she returned to the United States, she continued her education and graduated from the Duke University Physician Assistant Program, Cum Laude in 1988. Her work as a Physician Assistant began in Family Practice. She worked in rural health clinics in Sampson County and at The Southern Regional Area Health Education Center in Fayetteville, NC. She served as the Regional Clinical Coordinator for the Duke PA Program for eight years. She completed her Master of Health Science from Duke University in 1995 and continues as a Clinical Consulting Associate with the Duke Physician Assistant Program faculty. She joined the ABC Pediatrics’ provider team in September, 1998. In October, 2007, she was inducted into the Duke Physician Assistant Alumni Hall of Fame. Mrs. Jordan is a member of The American Academy of Physician Assistants, The North Carolina Academy of Physician Assistants and The American Society of Clinical Pathologists. Ms. Jordan speaks English, Spanish and Portuguese. Mrs. Jordan has been on two mission trips to Brazil and hopes to return someday doing medical missions. She enjoys gardening, reading, cooking, collecting angels and spending time with her family. She is an active member of Baptist Chapel Church in Autryville, NC. Mrs. Jordan loves her patients and they adore her kind hearted spirit and genuine loving nature. She is always willing to go the extra distance for her patients and will frequently end her appointments with a hug for her patients. Her patients know her as “Ms. Gloria”. Mrs. Jordan’s special medical interests are asthma, diabetes and adolescent medicine.