We currently live in an electronic age that allows for immediate connections to world-wide events. Twenty-four hour news cycles are created, documented and shared by social media postings, radio transmissions and television broadcasts.

Recently, these venues have negatively focused on law enforcement officers around our country and their daily struggle to make split-second decisions as they attempt to protect us and uphold the laws that we, as responsible citizens, should abide by.

We, the staff at ABC Pediatrics, feel compelled to express our sincerest appreciation to the men and women of our local law enforcement agencies and want them to know that we support their efforts. 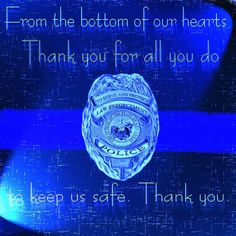 In a Democratic Republic, opinions are voiced and laws are created for everyone’s protection. If there is disagreement with a law or its intent, we have the Constitutional right to question it and voice our disagreement in a rational manner. We each have personal responsibility for our opinions and our actions. When our actions lead to illegal activities that infringe on someone else’s rights, we have empowered our law enforcement agencies to take corrective actions. We have given them that responsibility.

We believe every man, woman and child makes personal choices throughout the course of their daily lives. We support and we firmly believe in every person’s God given right and freedom to make their own choices. However, they should also accept and “own” the consequences of those choices and not make excuses for them. And when those personal choices break the laws we have in place and/or interfere with another person’s pursuit of happiness, we want our law enforcement agencies to know that we appreciate their efforts and actions to bring those law breakers to justice and deeply regret any loss of life in that process.

We at ABC Pediatrics have always held the sanctity of life in the highest regard, from the moment of conception, to the moment of natural death. We believe EVERY LIFE is equally sacred. No one life is less sacred because of skin color or race or religious belief. Often times, law enforcement officials are faced with life or death situations that require split-second decision making. We pray that our Lord will protect them and guide them in those split-second moments as they carry out their duties and enforce the laws that they swore an oath to uphold. In addition, please accept our heart-felt thanks and our sincerest appreciation for all your efforts on our behalf.