Skip to content
Let’s have an intelligent discussion about MEASLES
If you have any access to electronic media: TV, radio, smart phone, social media, then you are well aware that measles has been discussed ferociously over the last couple of weeks. Unfortunately, it is difficult to get an accurate picture or understanding of the current situation with measles in a 30 second sound bite or 140 characters. So, let’s spend a few minutes together and let’s take a look at measles and this current media frenzy in a rational and educated manner. 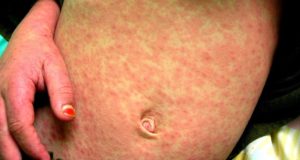 To get a full appreciation for measles, some historical perspective is in order.
A Persian doctor, in the 9thcentury, published one of the first written accounts of measles.
A Scottish doctor, in 1757, demonstrated that measles is caused by an infectious agent in the blood of patients affected.
In 1912, U.S. healthcare providers and laboratories were required to report all diagnosed cases. During the subsequent decade, an average of 6,000 measles-related deaths were reported EACH year.
In the late 1950s and early 1960s, nearly all children got measles by the time they were 15 years old and it is estimated that 3 to 4 million people in the United States were infected each year. Of those infected, an estimated 400 to 500 people died, 48,000 were hospitalized, and 4,000 suffered encephalitis (inflammation and swelling of the brain) from measles.
In 1954, John F. Enders and Dr. Thomas C. Peebles collected blood samples from several ill students during a measles outbreak in Boston, Massachusetts. They succeeded in isolating measles in 13-year-old David Edmonston’s blood.
In 1963, John F. Enders and colleagues transformed their Edmonston-B strain of measles virus into a vaccine and licensed it in the United States. In 1968, Maurice Hillman and colleagues developed an improved vaccine and began to distribute it. This vaccine, known as the Edmonston-Enders strain, has been the only measles vaccine used in the United States since 1968.
By 1981, the number of reported measles cases in the US was 80% less than in 1980.
In 1989, a second dose of measles vaccine was recommended for all children. Following widespread implementation of this recommendation, reported cases of measles declined even more.
In 2000, measles was declared eliminated from the United States. Eliminated means that there was an absence of continuous disease transmission for greater than 12 months. Also, measles is no longer ENDEMIC (constantly present) in the United States.
However, every year, measles is brought back into the United States by unvaccinated travelers (Americans or foreign visitors) who get measles while they are in other countries such as England, France, Germany, India, and in 2014, from the Phillippines and Vietnam. Most people in the United States are protected against measles because of the vaccination program.
Measles is a highly contagious respiratory disease of humans. No other animal species can spread measles. It is caused by a virus that is spread through the air and by droplets associated with coughing and sneezing. Measles virus can live for up to 2 hours on a surface or in an airspace where the infected person coughed or sneezed. The symptoms of measles generally appear about 7 to 14 days after a person is infected. Measles starts with a high fever (103 F to 105 F), runny nose, cough, red, irritated eyes and a sore throat. Two to three days after symptoms begin, tiny white spots (Koplik spots) may appear inside the mouth. Three to five days after symptoms begin, a rash breaks out. The rash starts as flat, red spots that appear on the face at the hairline and then spread downward to the neck, trunk, arms, legs, and feet. The spots may become joined together as they spread from the head to the rest of the body. When the rash appears, a person’s fever may spike to more than 104 F. After three to five days, the fever subsides and the rash fades. Approximately three out of ten people who get measles will develop one or more complications including pneumonia, ear infections, and/or diarrhea. Infected persons can spread measles to others from four days before to four days after the rash appears.
The measles vaccine is very effective and there is now irrefutable scientific evidence that the measles vaccine has no association with autism.
One dose of the vaccine is about 93% effective at preventing measles if exposed to the virus and two doses is about 97% effective. This does mean, however, that about three out of every 100 people who do get two doses of vaccine can still get measles if exposed to the virus. The good news is, fully vaccinated people who do get measles are much more likely to have a milder illness, and they are less likely to spread the disease to other people. In more recent years, health care personnel have seen a similar situation with the varicella vaccine and chicken pox.
You may be asking, is measles really a concern for the United States? Yes, it is, because measles is still common in many countries and travel to these countries occurs everyday.
Similarly, you may also be asking, could measles ever re-establish itself in the United States? Well, yes, it could be possible for measles to become endemic (constant presence of a disease in an area) in the United States again, but before we work ourselves up into a frenzy over this, let’s look at some objective data.
According to www.worldometers.info,as of 02.06.15, the population of the United States was 324,157,844. From January 1 to February 6, 2015, 121 people from 17 states were reported to have measles. That means that there were 0.37 cases of measles per MILLION people in the United States. Or, restated another way, there was 1 case of measles for each 2,702,703 persons in the United States. As a comparison, during the last week of January, 2015, the US World Health Organization noted that of the 22,122 specimens reported as tested for Influenza, 3,869 were positive. That means that in the one week from January 25 – January 31, 2015, there were 11.9 cases of influenza per MILLION people in the United States. Restated, that equals 1 case of influenza for each 84,034 persons in the United States. It is hopeful that this data helps put the measles “outbreak” into better perspective for you. 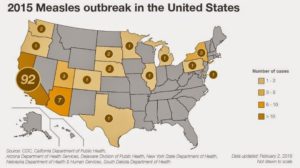 So, what does all this mean? Should you allow yourself to be whipped into a frenzy by the media over the current outbreak? NO. Should you be concerned about measles? Perhaps. Read on.

The current Centers for Disease Control (CDC) recommendations for children state that the first dose of MMR should be given at 12 through 15 months of age and the second (booster) dose be given at 4 through 6 years of age or at least 28 days following the first dose. However, if there are cases of measles occurring among infants younger than 12 months of age, measles vaccination of infants as young as 6 months of age may be used as an outbreak control measure. Children vaccinated before their first birthday should be re-vaccinated when they are 12 through 15 months old and again when they are 4 through 6 years of age.

If you or your loved ones have received 2 doses of measles vaccine as a child according to the U.S. vaccination schedule, or you were born before 1957, or a laboratory confirmed that you had measles at some point in your life, or a laboratory confirmed that you are immune to measles, then you are considered to be protected for life and do not ever need a booster dose of vaccine. You do not have to give this outbreak another thought.

If you are an adult born after 1957 and do not fall into one of the categories listed above, then you should consider having the blood test done or consider getting a booster dose of MMR (Mealses, Mumps, Rubella) from your health care provider if you are concerned in any way about this outbreak.
If you are a student at post-high-school education institution, or are healthcare personnel, or are an international traveler, you should consider getting two doses of MMR separated by at least 28 days if you are concerned in any way about this outbreak.
Persons exposed to measles who cannot readily show that they have evidence of immunity against measles, should be offered the MMR vaccine. If the MMR vaccine is administered within 72 hours of exposure, this may help to lessen the severity of the measles’ infection.
Infected persons should be isolated for four days after they develop a rash.
Should these recent cases of measles be a reason for the CDC or the federal government to mandate vaccination for measles? After all, there are mandates for seat belts, motorcycle helmets, smoking, and in at least one city, the maximum size allowed for your soft drink. Measles is a public health issue so why shouldn’t the CDC or the federal government be permitted to dictate personal options as they relates to vaccination choices?
At ABC Pediatrics, we absolutely encourage and support the use of vaccinations for known diseases. However, we will not refuse care to a patient or parent who chooses not to receive vaccinations for personal, moral or religious reasons. By the same token, we will not willingly or knowingly place any of our patients or parents in a situation of potential risk for infection from unvaccinated individuals. We have policies and procedures in place to address these concerns. ABC Pediatrics believes that the physician/patient relationship is of utmost sanctity, respect and value. Personal choices for the management of wellness and illness belong solely to the patient and his/her provider. At ABC Pediatrics, we believe in the innate instincts and intelligence of each of our patients and parents. We believe, as health care professionals, that our role is to inform, educate and explain wellness and illness options to our patients and parents and then permit them to make their personal decision. Our physician/patient relationship is based on trust, honesty and integrity for all persons involved. When this relationship is honored and respected, we believe that good medicine has been delivered. There is no need or desire for the federal government to be a part of this relationship. This philosophy has served us well for over 20 years. Most recently, this philosophy helped us navigate through the public health issues of H1N1, H3N2, Ebola and Enterovirus D-68. The recent measles outbreaks will be no different.

If we can be of any service to you or your loved ones during this unsettling time of media hype and hyperbole, please contact us at 910.892.1333 and let’s begin a relationship and have an intelligent discussion. Feel free to leave any of your thoughts and comments below or on Facebook.